Some of the individuals that we are currently observing may make up the population of overwintering adults. These individuals will seek out leaf litter and other cover in late fall. While these adults are in soybean, they can cause significant amounts of defoliation to the leaves. A reduction in available leaf area can lead to reduced levels of photosynthesis and lower yields.

Bean leaf beetles avoid disturbances, which makes them one of the more difficult insects to scout for in soybeans. Scouting and identifying bean leaf beetles can be especially difficult once soybeans have canopied. The best method for scouting is to use a sweep net and collect 20 pendulum swings from four locations within the field. The economic threshold for bean leaf beetles is 70-100 beetles per 20 sweeps. This is based on bean leaf beetle populations later in the season.

Adult bean leaf beetles can vary in color from brown (Figure 1-A), yellow (Figure 1-B), and orange to red (Figure 1-C). Bean leaf beetles have a black triangle located behind their thorax (segment behind black head capsule) and four black spots that are present on their hardened forewings (elytra).

An alternative to directly scouting for bean leaf beetles is to look for the defoliation amount occurring within the field. Later in the season, this method is often more effective because there are usually many different types of defoliators active in soybean. To scout for defoliation, examine 10 plants from five locations spread throughout the field (50 plants per field). For each of the plants, estimate the percentage of leaf area that is removed from all the leaves (i.e., defoliation). Record this for each of the examined plants and calculate the field average. Since the majority of soybean are past the initial flowering stage, the economic threshold for defoliation is 20%. At or above this level of defoliation a 3-7% yield loss may occur. Figure 2 has a visual guide for defoliation caused by bean leaf beetles and the associated percentages.

If defoliation of bean leaf beetle counts is above the threshold, an application of foliar insecticides is warranted to reduce the number of bean leaf beetles and possibly other defoliating insect populations. Refer to the latest South Dakota Pest Management Guide: Soybean for a list of labeled products.

If you are finding bean leaf beetles in the field, you will also need to scout for Bean pod mottle virus. This virus is primarily vectored, in the United States, by the bean leaf beetle. When bean leaf beetles feed on BPMV-infected soybean plants, they also ingest the virus and become a carrier (viruliferous). The virus can be obtained with a single bite of an infected plant. Virus transmission occurs rapidly with the next feeding. As the beetle moves throughout the field, it spreads the virus to the healthy plants.

Bean pod mottle virus symptoms are commonly confused with herbicide injury and can resemble symptoms of other viruses. Symptoms associated with BPMV include mild to severe chlorotic mottling or mosaic and rugosity (distortion or wrinkling) on foliage (Figure 3), stunting, and delayed maturity. Symptom severity may lessen during hot weather or with maturity; however, the plant remains infected with the virus. One effect of delayed maturity is the green stem disorder. This is where the stem remains green after the soybean pods have matured. Infection by BPMV decreases pod formation and reduces seed size, weight, and number. Seed coat mottling (the discoloration of the seed due to a black or brown pigmentation bleeding from the hilum) is another symptom caused by this virus. Grain with discolored seeds may be docked at the time of sale. Bean pod mottle virus is also associated with increases in seed infection by Phomopsis spp. 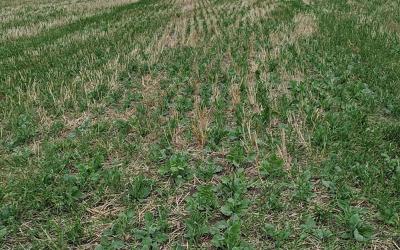 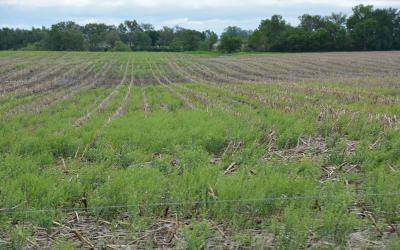